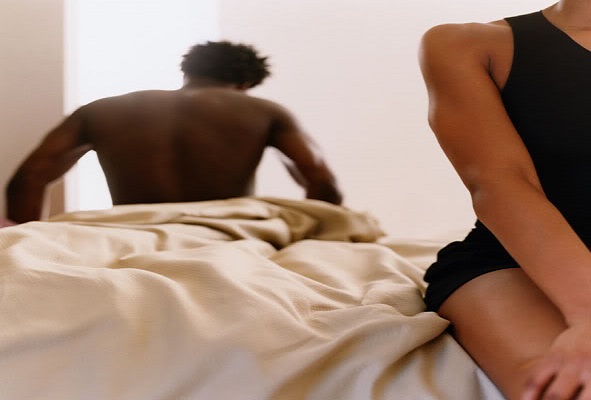 While I cannot count how many reasons Husbands don’t satisfy their Wives in bed, this very one is worth giving my time to write on. It’s something I have noticed in Marriages for long, and how heartbroken am I to see it growing at a rate more than alarming.

Read on and you will understand.

It’s just some months of their seemingly blissful marriage and the matrimony has been worth it to Joseph. But for Debby, it’s been like a dish with the most important recipe missing.

No matter how much Joseph gave, she was never satisfied since he was not competent in one area – on the bed!

Whenever they made love as a couple, she was ever-complaining. While Joseph would be glad the glamorous moment came, the wife would act as if nothing really happened.

Whenever he asked, there was no other way she would express her insatiability than “I am never feeling you” And you know, as a man, that statement bothered Joseph so much.

The timid husband would always think the reason for his poor performance was for the “going out early in the morning and coming home late at night” lifestyle that his work demanded.

Was he wrong? I bet you will agree that he was.

He would always plead for forgiveness and promised to be a better man, but that was only a fruitless talk to Debby.

Joseph was the most fortunate man on earth when he knew his one-month annual leave was coming. He promised the wife he would do everything to satisfy her, but as usual, the wife believed it would all culminate in prime dissatisfaction for she knew what was missing.

The time came and went. Disappointed, one month was not enough for poor Joseph to help himself out of his ordeal. Debby never praised him for a job well done for the one-month serious job on satisfying her. In fact, she told him categorically that she was really defeated with that area of his life as a man.

It’s not that Joseph was impotent; Debby could testify to that.

He was a virgin before they got married, but the wife had been in few relationships and, of course, had enjoyed herself as far as lovemaking could go. Now you could understand why Joseph’s inhibition deepened.

Joseph continued with his “leave-home-early and come-back-late lifestyle” and he was enjoying it except for his wife’s continual disapproval of his praiseworthy love life.

Within the space of two months, Joseph had developed a drinking habit, plus taking some herbal medicines in the bid to help himself out of the troubled moments menacing him.

His new life was really disturbing him emotionally, but the wife would not let him take a break, for her selfish reasons. Now the wife was enjoying her man gradually on the bed, even if the size of his manhood was part of her troubles.

The husband was with the wife on the bed on this fateful day as she was enjoying him, and unconsciously, she began to make mention of another man’s name.

Joseph heard the wife repeatedly saying, “Thank you Dammy” until he stood up, shouted at her and demanded an explanation.

As a good man that he was, there had been rumour that one Mr. Dammy on the street was having an affair with his wife, but since he wouldn’t believe the wife would ever be unfaithful to him, he shrugged it off.

With the worst mood she ever saw him on, the husband shouted, “Who is Dammy! Who is Dammy, Debby! Deborah, who is Dammy!”

What would she do than to open up for a confession?

Shivering as though life was coming out of her, she began to narrate the unfaithful part she had trodden.

Muttering, she said, “It’s the same Mr. Dammy… that… that… you know. Please, Joseph, I am sorry… I will explain… Dammy my love, please… You know I love you.”

Joseph noticed something from her words. Did you notice the same too? Read her confession again…

What’s that? She mentioned Dammy in the middle of her confessions!

That was the part that was too hard for Joseph to let go. He was ready to bounce on her but had to be calm, owing to his vow to never raise his hand on his wife.

He smiled a little but couldn’t help the tears rolling down his cheek.

He continued, “Debby, I helped you out of school single-handedly. I saved you from the hands of bad guys for the love I had for you. I gave you all that I had; even borrowed for you… I did all that for you to stop your wayward life…. And this is my reward right? …. Is this what I deserve?”

The shameless woman is by a corner, and now on her knees begging that he would hear him out.

“You want to talk right,” Joseph said to her and she nodded in the affirmative.”

Smiling he said, “I am listening. I give you all the time to say all you will say before I say my last words to you”

Still shivering, she continued her confession.

“Joseph, I am sorry I let this happen… And I am ready to face the punishment if only you will forgive me… You know, as would every woman, I have always wanted a man who would satisfy me on the bed… And you know… You know… I have been in many relationships and really know which one is…. which one… is the best for me… on the… bed.”

“That was how I started with Mr. Dammy… Joseph… Please forgive me and forget… I already stopped the moment I saw changes in you…”

“And you see… we only did it three times… and they were protected ones all through… Please, Joseph… ”
Now she decided to walk on her knees to meet her husband as she would do whenever she found herself in a mess like this, even if this is bigger.

She was wrong! Joseph stood up to meet her and this time, he was really ready to beat her black and blue… but he just had to smile a little and say…

“You wanted me to forgive you and I have forgiven you and forgotten you.

In fact, I have forgotten we were married as a couple and right now, you are like a burglar before me…

So, I am living this house for a week and then would come back to not meet any traces of you in here…. And you will do yourself good if you wouldn’t say a word… “

Joseph took few of his clothes in a backpack and left the house that night.

To cut the story short, that was the end of the one year and a month marriage.

So, what would you say to this?

The man was cruel, the lady was wicked and ungrateful?

And hear this from me.

Without telling you much, you should know what caused that lady’s misfortune.

What was that?  Premarital Sex!

Till date, many women and men alike are struggling with the same thing that ended Deborah’s marriage.

It is sad how ladies and guys have many sexual partners and then they want to have a husband or wife that will satisfy them on the bed.

You didn’t know that your body stores and “scores” all the sexual intercourse you would ever engage in; and it gauges one against another, setting a platform for comparison?

More often than not, many of these people end up in the home of partners whose libidinal impulses are unimaginable. And they go about complaining that they have a spouse who is not man or woman enough.

If you are married and this is your challenge, it is better you find a way to deal with it, before it deals with your marriage.

And you are a single guy or lady? I bet you know what to do by now. Don’t set yourself up for a show you will regret in the future. Help your marriage by shunning premarital sex! I can’t stress that enough, my friend.

Keep yourself and you will be glad you did in the end.

Men want women who would end their fuss and ado, not the ones who only know how to increase their libido! ~ Olalekan Adebumiti Click to tweet.

Let me announce to you “The Healing Balm”

It’s a program for anyone who has ever been on a relationship.

So, if you’ve ever been in a relationship and it broke, you need this program.

Why? Because there are many things your previous relationship(s) did to you that you are not conscious of. It’s worse if you have been in more than a relationship.

What you tend to gain?

How to Build the Perfect Heart for a Relationship.

Many people suffer from previous relationships and then cannot just make the present one work.

Like I said, it’s a firsthand therapy for anyone who has been in a relationship before now, and it’s required for anyone going into one soonest: a way to help you steer clear of the entanglements that romantic relationships sometimes bring.

But, it’s a privilege granted only to my Subscribers.

You can be part of this by dropping your name and email in the form below.

Thanks. Don’t forget to share for others to learn